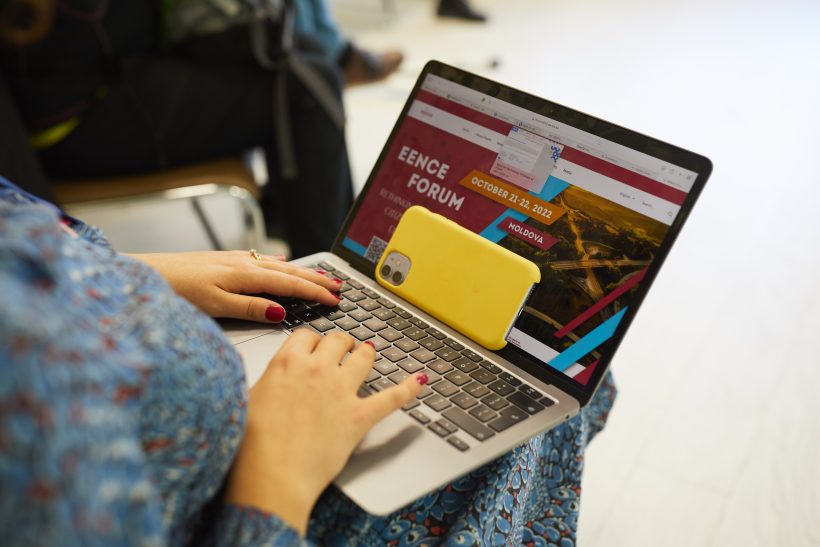 To meet the challenges of the time: the EENCE Citizenship Education Forum was held in Chisinau

More than 120 NGO activists, researchers, and experts working in the field of citizenship education took part in the event.

The Forum opened on October 21 with a plenary discussion.

The EU counselor on confidence-building measures, Kalman Mizsei (pictured below in the center), has noted in his speech that the Eastern Partnership remains one of the important priorities of the EU’s foreign policy, despite the war and other alarming events taking place in the region, as well as various geopolitical priorities of the countries of the region.

Tanja Hoggan-Kloubert (Ukraine/Germany) and Chad Hoggan (USA) in their speech focused on the importance of promoting dialogue in society in an increasingly growing gap in worldviews, as well as on pluralism and solidarity as key values for democracy.

The Forum has continued in five discussion platforms.

How to promote citizenship education in the world of fakes, disinformation and post-truth, that should become a priority for citizenship educators during the war, how to ensure the inclusiveness of our educational programs, how to support the educators themselves and not let them burn out, how to build relations with the state, which “in its own way” sees the meaning of citizenship education — The Forum discussions was dedicated to these topics.

The head of the Board of the Eastern European Association of Citizenship Education, Yuri Petrushenko, spoke about the results of EENCE’s work, as well as about the acute questions that the Network’s activists should look for answers right now.

The first day of the Forum ended with a discussion of ideas for joint activities that would make the work of citizenship instructors more effective nowadays.

The Forum participants generated and discussed about 20 ideas in the Open Space format.

Among them are the promotion of citizenship education in rural areas and among young people, training in the basics of cybersecurity, assistance to women who suffered from sexual violence during the war, the introduction of a human rights —based approach to education, etc.

On October 22, the Forum continued with a talk show “Cititzenship Education in the EAP region: How to preserve the common (without losing your own) in the conditions of the growing geopolitical gap”, as well as master classes from the Forum participants.

A partnership that CREATES, PROTECTS, STRENGTHENS — these are the words from the description of the priorities of the Eastern Partnership policy developed by the European Union.

But does the Eastern Partnership remain a region that unites? Ukraine, Georgia and Moldova have clearly declared their course towards integration with the European Union, official Minsk has supported Putin’s aggressive policy, battles between Azerbaijani and Armenian troops break out time after time. Is it possible in such a situation to consider this region as something whole now?

The participants of the talk show answered this question by “voting” with green and red cards. The majority raised green cards, noting that the Eastern Partnership is still a common platform within which it is possible to cooperate.

However, there were also opinions that the gap between the societies of different countries, provoked by Russian aggression and other conflicts in the region, is too large to think about any kind of cooperation now.

The experts invited to the talk show also shared their opinion on this issue:

Hanna Baraban (Belarus/Spain). An expert in the field of international relations, a political journalist. Master of the Barcelona Institute of International Studies in the Field of International Security, member of the GO “Ukrainian Expert Foundation”. Collaborated with Radio Liberty, Al Jazeera, EUobserver, Metropolitan magazine, ROM, TVNET, and other world media.

Tanja Hoggan-Kloubert (Ukraine/Germany). PhD, Associate Professor of the Department of Adult Education at the University of Augsburg (Germany), founder and CEO of the Association “German-Ukrainian Dialogue”.

The experts agreed that despite the significant differences in the geopolitical priorities of different countries in the region, and the different interpretation of democracy in these countries, there is still space for cooperation and this opportunity must be used at least at the level of civil society.

Answering the question about possible transformations of the EU policy towards the Eastern Partnership region, Hanna Baraban noted that now it is very important to share the difference between states and societies, and the European Union should become a good moderator of partnership in the region, taking into account the cultural specifics of each country.

Tanja Hoggan-Kloubert proposed three priorities for the work of civil instructors in the Eastern Partnership countries:

Professor Sergiu Musteata  paid special attention to the role of the education system for the promotion of democracy.

In his opinion, it is possible to improve the situation in the region only by investing in education and civic education, including. Citizenship education means gaining experience, fostering a culture of responsibility for one’s actions or inaction.

The participants of the talk show agreed that cooperation at the level of civil society between activists and educators from Azerbaijan, Armenia, Belarus, Georgia, Moldova and Ukraine should be continued.

This is the only way we can strengthen and support each other in promoting human rights, civic participation and other democratic values.

The Forum program was continued by ten workshops on a variety of topics.

The participants discussed topics such as critical thinking and the fight against fakes, historical memory, emotional self-awareness, visual thinking, educational analytics, inclusion in civic education, the role of youth in the development of local communities, etc.

The final chord of the Forum was a creative lounge, during which participants danced traditional Moldovan dances, listened to songs and music, but also were able to hear the civil position of the guests about the war in Ukraine, citizenship participation, etc.