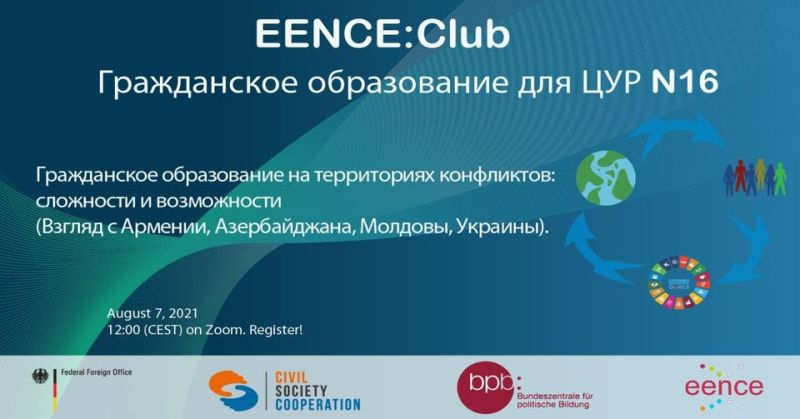 Civil education in conflict territories: we invite you to the 5th EENCE:Club!

Experts from Armenia, Azerbaijan, Moldova and Ukraine will share their views on the topic “Civil education for SDGs N16. Civil education in conflict territories: difficulties and opportunities”.

No century in the history of mankind has been without territorial conflicts in the world.

At the same time, such conflicts have many negative consequences: the death of people, the emergence of refugees and internally displaced persons, the destruction of homes and infrastructure facilities, the devaluation of international treaties and law in general, the creation of an image of an enemy from certain social groups, etc.

Civic education is generally understood as a process of forming skills, knowledge and values that promotes active and responsible participation in public life.

Because of its vastness and effectiveness, it can be used by different parties and groups involved in the conflict: both for the purpose of achieving democratic transformations, and for the purpose of ideological propaganda directed against the principles of democracy and human rights.

During the discussion, the participants will consider the current situation in the Transnistrian region, in Nagorno-Karabakh, in the Crimea and in the East of Ukraine, as well as discuss the possibilities of education in overcoming the consequences of conflicts.

Aleksandra Matveychuk (Ukraine)
Chairman of the Board of the Center for Civil Liberties.

Dilara Efendieva (Azerbaijan)
Director of the Civil Platform for Peace between Armenia and Azerbaijan.

EENCE:Club’s aimed at promoting democratic development and civic education through the creation of a platform for public debates and the exchange of experience. The project topics focus on the UN Sustainable Development Goals.

Summer and autumn promise to be hot: see how much is planned within the framework of EENCE

Women’s rights and human rights in the age of the pandemic: see the recording of the first EENCE:Club discussion

Art as a tool of public influence: the third meeting EENCE:Club took place

The role of Civic Education in Community Development